Exploring the Effects of Currency on Investment Returns

Over the last 6 months, global investors have watched as the U.S. Dollar index has strengthened against most of the other major currencies. The U.S. Dollar index, better known as the “Dixie”, is made up of numerous currencies including: the euro (58%), Japanese yen (14%), British pound (12%), Canadian dollar (9%), Swedish krona (4%) and Swiss franc (4%).

Many analysts have speculated as to why the U.S. dollar has risen so much. The consensus opinion is that it’s directly linked to the Fed’s ending of its Quantitative Easing program, while the rest of the world remains accommodative. The theory being that strong economic growth and the potential for rising rates will attract foreign investors. This inflow of foreign capital in effect pushes our currency higher (foreign investors must buy U.S Dollars), while weakening that of the foreign country (while selling their own currency).

How Does this Effect Investment Returns?

As mentioned above, when a domestic investor decides to invest abroad, they must sell their home currency (local) and buy the currency of the foreign country in which they are investing. Over time, if enough capital enters/leaves a country, the local currency will appreciate/depreciate. Lately, significant amounts of capital have flowed into the U.S. from Europe and in the process it has driven the U.S. dollar higher and euro lower. 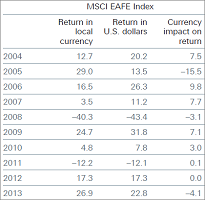 The full impact of currency movement on foreign investment returns can best be shown visually. The table to  the right shows returns for the MSCI EAFE index from 2004-2013. “Return in local currency” is the return an investor would’ve received had they invested in the MSCI EAFE index and not converted to U.S. dollars. The  “Return in U.S. dollars” column illustrates the return for investors who invested in the index and then converted to U.S. dollars. The final column, the “Currency impact on return” column shows the difference between the two and how meaningful currency fluctuations can be on returns. Years when the “Currency impact on return” is negative indicate that the U.S. dollar appreciated against the currencies owned within the MSCI EAFE index and vice versus for positive years.

To Hedge or not to Hedge?

One can clearly see on the table that currency fluctuations can be very volatile and unpredictable. One solution to this problem is to hedge one’s currency exposure, thus eliminating any currency risk. Many mutual funds and ETFs now provide active currency hedging within their strategies. The main risk to this solution is that the domestic investor’s currency appreciates against the foreign currency and has a negative impact on returns.

Overall, it is very difficult to forecast when and what currency will appreciate or depreciate. Rather, it might make more sense to consider a combination of hedged investments and non-hedged investments. This is something we’ve considered as a firm for our own portfolios and may pursue in the future.

As always, please feel free to contact us with any questions.